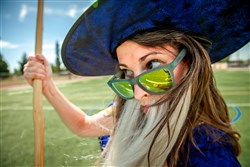 Classic shape with new levels of style and performance. We designed these shades to look good and fit comfortably on your face whether you're haulin' ass down a mountain trail or drinking beers in a Mexican cantina.

While it might be the magic that gets them all the love, we prefer to celebrate wizards for their panache: capes, pointy hats, and, beards. But just wait until you see one on their beach run rocking these fresh blue shades with gold lenses. Abracadabra, Muggles.

NO SLIP. NO BOUNCE. ALL FUN.

The Myrddin Emrys Memorial Resort & Spa for Practitioners of Sorcery and the Magically Inclined (or simply “The Myr” for those in the know) is located exactly where one would not expect it to be, which makes it makes it particularly difficult to find for those who actually would like to locate it. Really, speaking in a strictly physical sense, the Spa is not “located” anywhere accessible by typical transport. As such, only those with invitations may visit The Myr.

This feature was no accident, of course, as wizards (a class to which the founders of The Myr belonged) never do anything they do not mean to do. As it turns out, vendors of all types are constantly hoping and trying to get a practitioner of sorcery or one of the magically inclined to endorse their products. Such an endorsement can mean the difference between a life struggling in backwater flea markets and running a booming retail empire. But practitioners are stingy with their endorsements and will only lend their name to those products with which they have formed a deep connection, usually through use in stressful situations, like battles with Sauron or Voldemort. (Fuck that clown we’re not scared of saying his name)

Back before goodr was an internationally recognized brand, the founders would try everything to get their products in the hands of anyone who could help to bring recognition to their brand. So when the goodr founders learned that both Dumbledore and Gandalf the White were avid trail runners, they knew that they had to get the goodr Running Sunglasses in the hands of the two great wizards. Both wizards often vacationed together at The Myr and so it was decided that they would try to kill two birds with one stone by convincing them both to endorse the goodr Running Sunglasses by approaching them at The Myr.

Now, as mentioned earlier, one does not simply walk into The Myr. Its gates are guarded by more than just bellhops. There is relentless hospitality there that does not sleep, and the hotel manager is ever watchful. It is a luxurious dreamland, riddled with fresh linen and pillow mints and free bathrobes, the very air you breathe is a green fig fragrance. Not with ten thousand men could you simply walk in. It is folly.

But the goodr founders are nothing if not foolish. After months of research and many failed attempts, the goodr founders learned that The Myr was constantly on the lookout for pool boys to assist with the resort’s hugely popular magical lagoon. By fabricating elaborate pool boy resumes and fake references from the swankiest hotels across the world, the goodr founders secured positions as pool boys at the Myr. From there it was a simple matter of making sure that they were placed on sunscreen duty when Dumbledore and Gandalf would come down for their daily sunbathing appointment. Typically, the pool boys at The Myr loathed sunscreen duty as it required them to apply and rub in generous amounts of speciality sunscreen to the various guests of the lagoon, which could take a good deal of time depending on the proclivities of the guests. But the goodr founders knew that this would give them the time needed to pitch their Running Sunglasses to the great wizards.

After several weeks of biding their time, the moment finally came and the two wizards called the goodr founders over to apply the sunscreen. The goodr founders were ecstatic and blessed the gods for their great luck when the wizards began discussing their last trail run. Not surprisingly, wizards do not frequent the same trails as mere mortals. Gandalf’s had just returned from running Lhotse, while Dumbledore had enjoyed the views at Aconcagua.

As the wizards traded stories of their adventures, the goodr founders mustered their courage and broke in to ask the wizards what kind of sunglasses they wore while up at those extreme altitudes. After recovering from the shock of having a pool boy interrupt them (a rule that was never broken), the two dismissively stated that they never run with sunglasses as all running sunglasses look awful and are not befitting of a wizard’s carefully crafted aesthetics.

Upon reaching the goodr founders, the two wizards extended their hands as they congratulated the goodr founder on creating the most astonishing and attractive pair of running sunglasses they had ever worn. The two wizards immediately agreed to endorse the sunglasses, which launched goodr from a little-known brand to one of the largest sunglass companies in the world. After this momentous event, the goodr founders dubbed their newest colour scheme “Sunbathing with Wizards” to honour the event that helped to make them so successful.

As a post-script, the goodr founders, Dumbledore and Gandalf remain in contact to this day and are actually the members of a barbershop quartet, which plays bi-monthly at Maggie’s Pub and Eatery in Beaufort, South Carolina.

The benefits of cycling glasses

Cycling glasses protect your eyes from damaging UV rays, harsh glare and flying debris. Wearing cycling glasses doesn't only offer protection, they can also enhance your visual acuity (your ability to spot objects on the road or trail), colour and depth perception.

How to choose cycling glasses

You can spot cycling glasses from standard sunglasses by their frame design. Cycling glasses sit close to the face and have a wrap-around lens profile as well as curved arms. Standard glasses have a flatter profile.

Dual lens glasses are available with interchangeable lenses so you can switch to tinted versions that are suitable for your riding conditions.

What are interchangeable lenses?

Many cycling glasses come with a range of lenses in different shades. You can simply swap the lenses for the conditions you're going to be riding.

Grey – low to bright conditions. A good option for daily use without distorting colours and reduce glare

What are photochromic lenses?

Photochromic lenses tint with changes in light intensity. They're a good option for riders who cycle in unpredictable weather or mountain bikers who switch between open and shaded areas. With photochromic lenses you don't need to switch lenses all the time.

What are polarized lenses?

Polarized lenses are designed to reduce glare and reflection whilst also offering improved UV protection. By reducing glare you can see objects on the road ahead much easier.

Which glasses are best for me?

It's a good idea to choose cycling glasses for the type of riding you're most likely to be doing.

You don't need aero designed glasses at slow speeds, or wrap-around coverage. A pair of casual looking sunglasses with UV protection are enough and look stylish off the bike too.

Again you'll have a slower average speed than road cycling so you can get away with a casual style but look for those with plenty of grip on the nose bridge and arms. Variable light conditions means a photochromic lens would be a good option.

Fast paced road cycling means a close fit with venting are a good choice. Interchangeable lenses that focus on improving contrast will help you navigate debris on the roads.