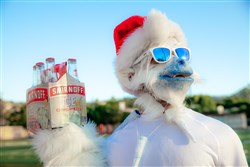 Classic shape with new levels of style and performance. We designed these shades to look good and fit comfortably on your face whether you're haulin' ass down a mountain trail or drinking beers in a Mexican cantina.

Yetis. Are they real, or just some weird Tibetan folklore? We're here to tell you, they've been right under your nose the whole time. If you ever encounter a Yeti on a run, just be ready to combine your basic hip flexor warm-up with extreme hydration in a technique we like to call "Iced by Yetis".

NO SLIP. NO BOUNCE. ALL FUN.

The last chance for a set of hopeless romantics to prove their self-worth in a most irrational way? Most assuredly.

It may have been all of these things or none of them, but what is certain is that our decision to spend a spring travelling with the Yeti during their annual migration from their winter home in the tunnels of the Moscow Metro (Arbatsko-Pokrovskaya Line) to the Finnish Laplands was one that would forever shape goodr.

The success of the whole trip was dependent upon whether or not we could convincingly perform the ceremonial preparation and presentation of the yeti-Brännvin, the famous and traditional alcoholic drink of the Yetis. Up to that point, all who had tried to perform the yeti-Brännvin ceremony had failed and had been sent away in humiliation as the Yetis guffawed at their fumbling attempts.

But through nefarious means of which we are not proud, we had acquired a secret that had been all but lost to history; a secret that would allow us to accurately perform the yeti-Brännvin ceremony.

While most every child learns of the Yetis during their formative years, what is less known is that the famous Russian svengali Grigori Rasputin was once a trusted advisor and confidant of the Yetis. However, in typical Rasputin fashion, one evening after a wild Yeti-party, Rasputin stole the recipe of the yeti-Brännvin from the chief Yeti. Rasputin kept this recipe secret until he lost it gambling after losing a game of Monopoly to a gentleman by the name of Pyotr Arsenievich Smirnov, the founder of the Smirnoff vodka distillery.

After acquiring the yeti-Brännvin recipe, Pyotr Smirnov quickly realized the commercial potential of the drink and went on to mass-produce yeti-Brännvin. And the name under which they marketed yeti-Brännvin? Why, it was none other than Smirnoff Ice.

This secret knowledge in hand, we approached the Yetis, each with a Smirnoff Ice in hand. Stopping about 10 feet in front of the largest congregation of Yetis, we quickly sank to a single knee, produced the Smirnoff Ices from behind our backs and proceeded to expertly consume the beverages as quickly as we could manage. Upon lowering the bottles from our lips, it was clear that we had succeeded.

The months with the Yetis following the icing would lay the groundwork for many subsequent accomplishments, both by goodr and the Yetis. It is a small token of our appreciation that we named these sunglasses after this most epic of adventures.

The benefits of cycling glasses

Cycling glasses protect your eyes from damaging UV rays, harsh glare and flying debris. Wearing cycling glasses doesn't only offer protection, they can also enhance your visual acuity (your ability to spot objects on the road or trail), colour and depth perception.

How to choose cycling glasses

You can spot cycling glasses from standard sunglasses by their frame design. Cycling glasses sit close to the face and have a wrap-around lens profile as well as curved arms. Standard glasses have a flatter profile.

Dual lens glasses are available with interchangeable lenses so you can switch to tinted versions that are suitable for your riding conditions.

What are interchangeable lenses?

Many cycling glasses come with a range of lenses in different shades. You can simply swap the lenses for the conditions you're going to be riding.

Grey – low to bright conditions. A good option for daily use without distorting colours and reduce glare

What are photochromic lenses?

Photochromic lenses tint with changes in light intensity. They're a good option for riders who cycle in unpredictable weather or mountain bikers who switch between open and shaded areas. With photochromic lenses you don't need to switch lenses all the time.

What are polarized lenses?

Polarized lenses are designed to reduce glare and reflection whilst also offering improved UV protection. By reducing glare you can see objects on the road ahead much easier.

Which glasses are best for me?

It's a good idea to choose cycling glasses for the type of riding you're most likely to be doing.

You don't need aero designed glasses at slow speeds, or wrap-around coverage. A pair of casual looking sunglasses with UV protection are enough and look stylish off the bike too.

Again you'll have a slower average speed than road cycling so you can get away with a casual style but look for those with plenty of grip on the nose bridge and arms. Variable light conditions means a photochromic lens would be a good option.

Fast paced road cycling means a close fit with venting are a good choice. Interchangeable lenses that focus on improving contrast will help you navigate debris on the roads.

Note: We are still offering deliveries to the Isle of Man, Scottish Highlands, Scottish Islands, Channel Islands, Isle of Wight, Jersey and Guernsey. We are no longer delivering to Northern Ireland.

We will give you a full refund or exchange on any item that is returned to us unused/unfitted, in a resaleable condition and in its original packaging (where possible).

Goodr Sunset "Squishee" Brain Freeze - The OG Sunglasses
Now £25.00
We use cookies to provide you with the best possible experience. We also share information about your use of our site with our social media, advertising and analytics partners. View our cookies policy to find out more