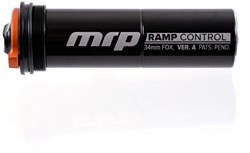 MRP’s Ramp Control cartridges are designed to fit RockShox forks with 35mm stanchions. This upgrade threads into the air spring on Pike, Yari, Lyrik and Boxxer forks and allows the user to dial in the amount of progression in the fork without resorting to adding or subtracting RockShox’s bottomless tokens. Adjustments add between 1 (fully open) to 4 tokens worth of adjustment (Fully closed). 16 clicks give roughly 20% of one token per click in Rock Shox forks.
CUSTOM TUNE ON THE TRAIL
Undoubtedly, convenience is one of the biggest benefits of the ramp control cartridge versus internally accessed volume adjustment components. Internally accessed spacers aren’t that friendly to on-trail experimentation and tuning – requiring bulky tools and a clean environment to utilise. With Ramp Control, experimentation is so simple it’s encouraged! The powerful range of Ramp Control is harnessed through a simple 16-position knob with clearly defined detents. That enables you to arrive at your base setting in just one ride on a familiar trail, whereas internally accessed spacers would necessitate a trial and error approach – several rides followed by garage or shop sessions – to get to the same point.
A BETTER WAY TO TUNE
The volume adjustment spacers used by competing brands change the shape of the air-spring’s curve throughout the entire travel range, regardless of velocity. Aside from the slight change resulting from volume of the cartridge itself, the Ramp Control upgrade effects only the ending stroke spring curve – as its damping effect is velocity dependant. This portion of the curve represents intense, sharp hits and big events, like landing a sizeable drop or ploughing through a rock garden. Without Ramp Control, your forks behaviour in these circumstances has been compromised by your desired feel elsewhere in the stroke. With Ramp Control, you can tune the general feel of your fork through its air pressure and damper settings, and isolate big hit performance and bottom-out with Ramp Control adjustment.
NO MORE COMPROMISES, TUNE TO THE TRAIL AT HAND
Unless you ride just one trail, the air-spring volume you’ve so carefully tuned with internally-accessed volume spacers is probably not ideal for all your adventures. A trip to the bike park might reveal, for example, that more support would be welcomed when the features ad drops get bigger and trails get steeper than those found on your local go-to. If you have extra spacers and the necessary tools on hand, and don’t mind burning time that could otherwise be spent riding the lift accessed terrain you just paid for, you could get the needed support. Or, in just seconds, you could add more Ramp Control and keep the good times going. Whether it’s a new-school flow trail or near vertical DH course, Ramp Control gives you immediate control of the terrain at hand – of particular benefit to time-crunched endure fans tasked with practicing and racing multiple, varying stages.
Please note that Rock Shox fit models are only compatible with Solo Air Rock Shox forks.
Rock Shox Model A
? Pike 2013-2016 15x100 (Non-Boost) **recommended for 140mm+ 29" and 130mm+ 26"/27.5" - See Model C for short travel Pike Non-Boost forks
? Boxxer World Cup 2010-2016
Solo Air Models Only
Rock Shox Model B
? Pike 2015-2016 15x110 (Boost)
? Pike 2017 (all models)
? Lyrik 2015-2017
? Yari 2015-2017
**recommended for 140mm+ 29"/27.5+ and 130mm+ for 26"/27.5" - See Model D for short travel options
Solo Air Models Only
Rock Shox Model C
? Pike Short Travel 2013-2016 15x100 (Non-Boost)
**recommended 120mm 27.5" 120mm/130mm 29"
Solo Air Models Only
Rock Shox Model D
? Pike Short Travel 2015-2016 15x110 (Boost)
? Pike Short Travel 2017 (all models)
? Lyrik Short Travel 2015-2017 (all models)
? Yari Short Travel 2015-2017 (all models)
**recommended120mm 27.5 120mm/130mm 29
Solo Air Models Only
Rock Shox Model E
? Reba 2013-2017
? Revelation 2013-2017
? Sid 2013-2017
? Bluto 2014-2017
**Recommended for 100mm-140mm 29", 27.5+, 27.5", 26", and fat forks
Solo Air Models Only
Fox Model A
? 34 Float 2016-2017 with FIT4 and GRIP dampers
**recommended for 140mm+ 29", 27.5+, and 27.5" forks

How do I apply for finance?

At Tredz, you can spread the cost of your purchase and pay monthly over 6-48 months, interest free (dependent on repayment terms and amount). Finance is provided by Barclays Partner Finance and PayPal Credit with 0% APR finance available on purchases over £250 for Barclays Partner Finance and from £99 for PayPal Credit. Eligibility criteria apply.

1Fill your basket with everything you want from Tredz and go to the checkout.

2During checkout, select the finance option you want as your method of payment.

3You will be sent to our finance provider's secure server to complete your application.

4Finance providers PayPal & Barclays will use the information provided to make a decision and complete checkout if you are approved.

Read more about buying on finance

*Not available with PayPal Credit