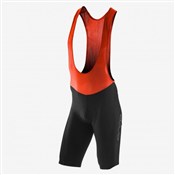 In 1965, French champion Jacques Anquetil made history by winning the 8-day Critérium du Dauphiné Libéré and then the 557km Bordeaux-Paris race the following day. 50 years later, in May 2015, our own champion Nicolas Roux paid homage to Anquetil’s achievements by riding the same route from Bordeaux to Paris – in a day, starting at 1am, with just one stop.
And he did it in these Cosmic Pro bib shorts.
They feature a bonded low-profile bib and 37.5TM Knit. They’re some of the lightest bib shorts in the world at 180g. While for comfort they feature our Ergo 3D Pro Insert – a chamois featuring progressive cushioning, with three different densities of foam that’s softer by your skin and harder by the saddle for incredible shock absorption.