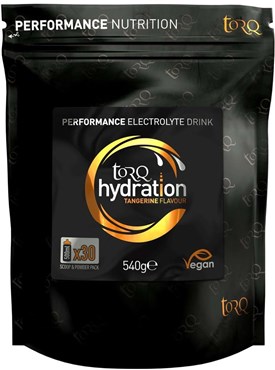 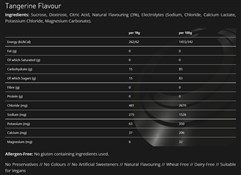 TORQ Hydration is a lightly flavoured hydrating drink mix, which has been formulated to optimise fluid and electrolyte delivery over any other factor.

TORQ Hydration Drink uses passive and facilitated transport mechanisms to optimise fluid and electrolyte delivery. Its hypotonic formulation capitalises on the passive transport process, whilst the high sodium and mild glucose content drives the facilitated transport activity. This makes TORQ Hydration Drink the most thorough and effective hydration product on the market today, with significant benefits over electrolyte tablets.

TORQ Hydration Drink’s advanced hypotonic formulation is specifically aimed at optimising hydration where events/sessions are no more than an hour long, and heavy sweat loss is anticipated. Indoor training activities like Zwift, Sufferfest and studio cycling for cyclists and other indoor exercise classes like body pump and circuit training are good examples. TORQ Hydration Drink can also be used as part of the TORQ Fuelling System during longer events as an alternative to TORQ Energy Drink and is a popular choice with runners who can combine it with TORQ Gels to satisfy their fuelling and hydration requirements.

Consuming 1 litre of TORQ Hydration along with a concentrated fuelling unit every 30 minutes would provide you with the optimal 90g of carbohydrate per hour (3 TORQ Units).

If you were to drink only 500ml of TORQ Hydration in an hour, with this approach you would take on board 75g of carbohydrate per hour, but this is still a very good level of fuelling. It would still sit within the 2-3 TORQ Units per hour range and would put you somewhere between Intermediate and Advanced on the ‘Easy as 1 2 3’ scale.

Hypotonicity: For any drink/solution to be effective in hydrating us, it must be rapidly absorbed into the body. One of the main factors affecting how quickly solutions are absorbed, is the speed at which it can move across the wall of the small intestine and into the blood stream. Fluids are absorbed into the body almost exclusively in the small intestine, via two main mechanisms; passive transport, and facilitated transport.

Facilitated Transport: Water can also enter the body in the small intestine as a result of the absorption of carbohydrate and sodium, through the process of cotransport. Carbohydrates, such as glucose, are absorbed into the body via a specific transporter called sodium-glucose cotransporter 1, or SGLUT1 for short. These transporters act as a conveyor belt for glucose and sodium, moving them across the small intestine without the need for an osmotic gradient. As carbohydrate and sodium is moved through the SGLUT1 transporter, it also drags with it large volumes of fluid, significantly assisting in hydration. For every single glucose molecule (and 2 sodium molecules) that is moved by SGLUT1, 260 water molecules are moved with it.

The Fastest Possible Method of Hydration: A hypotonic solution offering combined passive and facilitated transport mechanisms represents the fastest possible way to hydrate. In situations where perspiration rates are extremely high over short periods of exercise (up to 60 minutes), including intense indoor turbo/cycling sessions, spinning classes and short competitions in extreme heat, replenishing fluids with TORQ Hydration will deliver superior performance over any other fuelling/hydration strategy.

Electrolytes: TORQ Hydration Drink contains Sodium, Chloride, Magnesium, Potassium and Calcium to replace the 5 electrolytes lost through perspiration. These salts maintain homeostasis within the body, allow it to hold onto water and preserve muscle function. As the animation above demonstrates, the sodium content of TORQ Hydration combined with the light glucose content is essential for the facilitated transport process to take place.

Disadvantages of Pure Water: Pure water is a particularly poor hydrator. Plain water causes bloating due to poor absorption and also suppresses the thirst reflex, leading to decreased desire to drink. It also stimulates urine output and is therefore, inefficiently retained within the body. The carbohydrate and electrolytes in TORQ Hydration’s formulation overcome all of these problems.

Natural Flavours and No Colours: Under exercise stress, digestion is affected as blood is diverted to the working muscles and any solutes added to a product will raise its osmolality unnecessarily making it harder to absorb, so irrespective of the health debate surrounding the consumption of artificial ingredients, during exercise is certainly not the time to take them. Therefore, we only use natural flavours that the body can recognise and break down easily and we don’t use colours (artificial or natural), because they simply don’t need to be in the product.

No Artificial Sweeteners: For the same reasons as highlighted above, we don’t believe in the use of artificial sweeteners like Aspatame, Acsulfame-K, Saccharine and Sucralose. These artificial sweeteners are 100’s of times sweeter than sugar and Aspartame/Acsulfame-K are particularly controversial with regard to long-term health. They offer no performance benefit at all and our stance is the same with these as with colours and preservatives – if they don’t need to be included in our formulations for functional reasons, why include them?

Torq Recovery Plus Hot Cocoa Drink - 500g
Now £20.23 Save £2.76
We use cookies to provide you with the best possible experience. We also share information about your use of our site with our social media, advertising and analytics partners. View our cookies policy to find out more