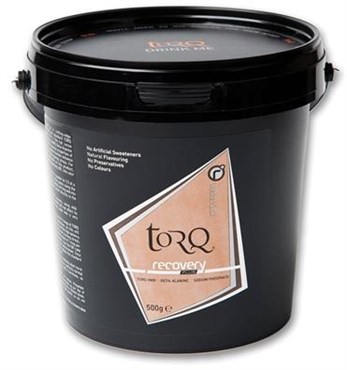 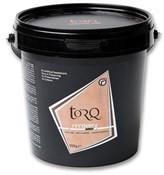 TORQ Recovery Plus+ is a Hot Cocoa drink containing Beta-Alanine, HMB and Sodium Phosphate, which has been designed for twice-daily use during periods of very intense training stress and during the race season. It also benefits power-based disciplines like Track Cycling, BMX and Downhill Mountain Biking.

TORQ Recovery Plus+ is a hot cocoa drink containing HMB, Beta-Alanine and Sodium Phosphate that is to be taken twice daily. It doesn’t have to be mixed hot, but it really does make a great tasting cup of cocoa, so we advise that you take your time and enjoy this product. If you’re in a rush, add 2 level scoops of the powder to 250ml of fresh cold water in your mixer bottle and give it a good shake. Sugar can be added to sweeten further if required.

Essentially HMB has anabolic benefits, so helps with muscular repair and development, whilst Beta-Alanine assists with the development of top-end power and lactic acid tolerance. Sodium Phosphate helps with the development of aerobic power. It is the interplay between HMB and Beta-Alanine that makes this product so exciting however, because Beta-Alanine exploits top-end power, which in turn results in micro-tears in the muscle structure and a fatigue stimulus to the anaerobic energy systems. HMB, with it’s anabolic properties then works to rapidly knit this fatigued muscle tissue back together and this is the very essence of the ‘training effect’. Fatigue – Compensation – Supercompensation. Beta-Alanine drives a larger fatigue stimulus and HMB creates a larger and quicker supercompensation.

Mixing: Add 2 level scoops of TORQ Recovery+ powder to 1/3 of a mug of cold water and mix thoroughly into a thick paste using the thin end of a spoon. Add boiling water slowly whilst stirring and mix into a smooth hot beverage. Do NOT add hot water directly to the powdered ingredients.

Dose: Drink 2 mugs of TORQ Recovery+ per day with at least 6 hours separation, as this will deliver the research-recommended daily doses of the high-potency nutrients most effectively.

Variations: Unlike our standard TORQ Recovery Drink, using milk instead of water or adding sugar to this product will not affect its functionality. TORQ Recovery+ can also be made into a very palatable cold drink – just mix with cold water.

Tingling: Beta-Alanine ingestion leads to a relatively short-term tingling sensation to the skin. This ‘flushing’ is a perfectly normal response to this nutrient and is harmless, so please don’t be alarmed!

TORQ Recovery Plus+ should be consumed daily, even on rest days. Intermittent use of this product is not recommended. All of the nutrients in TORQ Recovery Plus+ need to be taken daily and in 2 divided doses to have maximum effect, as explained in the dosing instructions above. The research suggests that HMB and Sodium Phosphate will have a reasonably immediate effect, but many of the studies into Beta-Alanine supplementation suggest that the greatest benefits are likely to be gained once the amino acid has been in your system for a sustained period of time and most protocols have tested athletes after a loading phase of 4 weeks. That is not to say that benefits won’t be gained in less than 4 weeks, but if you have a particular goal in mind, you should aim to start consuming TORQ Recovery Plus+ at least 4-weeks before you want to get the performance benefits from it.

Use Throughout your Entire Racing Season: Since the benefits of TORQ Recovery Plus+ are fully realised during high intensity training or racing, our advice to seasoned racers is to start taking the product during the pre-season when intensity of training is increased and continue with it throughout the season. During the off season where training intensity drops and volume increases, benefits will still be gained from the anti-catabolic qualities of HMB, but you will be paying for Beta-Alanine and Sodium Phosphate, which will be having little effect on your performance at this time. In which case, we recommend that you cease using TORQ Recovery Plus+ and purchase our BULQ HMB product and maintain a daily dose of that by mixing it into some fruit juice. Using TORQ HMB on a daily basis in the off season will be much easier on your purse than TORQ Recovery Plus+ – save this for when you’re competing.

Cycling/Activity Holidays, Training Camps and Key Races: You could consider using TORQ Recovery Plus+ as a peaking tool for stage races, training camps or cycling/activity holidays? Training camps and cycling holidays for instance invariably get a tad competitive, so if you know that the exercise is going to be of an intermittent nature, start using TORQ Recovery Plus+ at least 4 weeks before you go as you train up for the trip and continue taking it throughout the holiday. You could also use TORQ Recovery Plus+ in the lead up to an important one-off event too – if the event is that important to you, it will be worth investing in a 4-week loading phase.

TORQ Recovery Plus+ combines 3 potent nutrients, HMB, Beta-Alanine and Sodium Phosphate and we discuss them in detail here. We also look at the integral properties of cocoa.

HMB: HMB (Beta-hydroxy beta-methylbutyrate) is a metabolite of the amino acid Leucine. This means that it is a natural bi-product of the breakdown of leucine, a constituent of normal dietary protein. Small amounts of HMB are found in certain foods like catfish, alfalfa and it is a natural component of mother’s milk, but generally speaking it’s pretty scarce in the average diet. HMB was first discovered in the 1950’s and has been studied for several decades, but only really became popular as a sporting supplement in the mid 90’s.

HMB has been found to slow down the degradation of muscle protein as well as enhance muscle gain, which means that it possesses both anti-catabolic and anabolic qualities. Early research has demonstrated that HMB supplementation lowers cholesterol and helps strengthen the immune system too.

Beta-Alanine: Beta-Alanine is one of the branched chain amino acids, naturally present in white meat and fish, but supplementation with this nutrient at a dose of 5-6 grams per day in divided doses has been found to significantly raise muscle Carnosine levels, helping the body to buffer lactic acid and ultimately increasing anaerobic performance. Beta Alanine has been included in the ingredient matrix of TORQ Recovery Plus+ not only to promote recovery after high intensity bouts of exercise like racing and interval training, but also to enhance performance during these sessions. If your anaerobic performance is increased, you will produce more power and you will be able to sustain it for longer. This will have the effect of overloading the muscles and this is where HMB works beautifully as a natural anabolic (body building/repairing) aid to knit everything back together after the trauma of muscle-shredding exercise.

Sodium Phosphate: Sodium Phosphate has been studied in some detail and a strong relationship exists between supplementation with this compound and increases in maximal oxygen uptake (6-12%) and cycling time trial performance (29,30,31,32,33). One of these studies confirmed this finding by reporting higher than average power output readings over 16.1km, so effectively Sodium Phosphate improves anaerobic threshold.

Cocoa: Cocoa is a major constituent of TORQ Recovery Plus+ and has a plethora of properties, naturally integrated into its fabric, which can’t be ignored from a both a physiological recovery and human health perspective. One of the most interesting things about cocoa is its antioxidant content. Some recent investigations have shown that it has more of the antioxidants and flavornoids than many foods typically considered high in antioxidants, such as green tea and blueberries. The antioxidants within Cocoa have been shown to help reduce blood pressure and the risk of heart disease, as well as aiding improve immune function. Antioxidants also help to protect against the damage free radicals cause to muscle membranes and sub cellular structures.

Gluten Free Formulation: TORQ Recovery Plus+ is a gluten-free product.

No Artificial Sweeteners: We don’t believe in the use of artificial sweeteners like Aspatame, Acsulfame-K, Saccharine and Sucralose. These artificial sweeteners are 100’s of times sweeter than sugar and Aspartame/Acsulfame-K are particularly controversial with regard to long-term health. They offer no performance benefit at all and our stance is the same with these as with colours and preservatives – if they don’t need to be included in our formulations for functional reasons, why include them?

Torq Recovery Drink - 500g
Now £16.99
We use cookies to provide you with the best possible experience. We also share information about your use of our site with our social media, advertising and analytics partners. View our cookies policy to find out more